We are a local section of the American Chemical Society located in the Capital District of New York State, which includes the cities of Albany, Schenectady, Troy, Rensselaer, and Saratoga Springs. Our organization promotes public awareness of chemistry by involvement in outreach programs in our community, and works with students to encourage an interest in the chemical sciences. 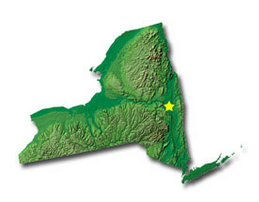 Listings of upcoming meetings and events

Pictures from recent meetings and events

The ACS Eastern New York Section will be presenting the 2021 Buck Whitney Award to Dr. Todd Hyster during our March 16 meeting at Nicole’s in Albany.  Dr. Hyster will present on his research during the meeting.  See the Events Calendar for details.

This award was established by the Eastern New York ACS section executive committee in 1976. The name of the award, Buck-Whitney, was chosen to recognize two of the most eminent research directors in the section.

Johannes Buck was associate director and subsequently director of research at Sterling Winthrop (SWRI) from 1942 until his death in 1956. Born in England in 1895, he received his Ph.D. working for Heilbron at the University of Liverpool in 1922. He continued his research working for Perkins until 1924. He taught at Yale and Duke until 1929. He then became head of the organic chemistry section of Wellcome Research Labs until 1942. Willis R. Whitney was director of research at General Electric Corporate Research & Development (now GE GRC) from 1900 until his retirement in 1932. He was born in 1868 in Jamestown, NY. He was educated at MIT and received his doctorate at the University of Leipzig. He then taught at MIT. He came to Schenectady, NY, in 1900 with doubts whether there would be enough challenging problems in the GE Company to hold his interest. For several years, he worked on a part-time basis. He was a charter member of our section, was first chair of the section, and in the following year became national president of the ACS. The purpose of the award is to recognize excellent original contributions to pure and applied chemistry. The recipient is preferably someone who has not yet achieved national recognition as evidenced by a national award from the ACS. The recipient is expected to deliver an address before the meeting at which the award is made. Past recipients of the Buck-Whitney Award have gone on to win further awards, even Nobel Prizes in Chemistry, as demonstrated in 1999  by Ahmed Zewail and 2003 by Paul Lauterbur. A fund, started with donations from SWRI and GE GRC, was established. It provides a bronze medal, a cash award and an expense stipend for the recipient.

Officers for the Eastern New York Section of the ACS are elected annually in October/November.  Our officers are responsible for the administration of the local section

The Eastern New York section of the American Chemical Society has over 900 listed members.